“Bread may feed my body, but my horse feeds my soul.” ~ Anonymous
You are here:About»Lisa Latta – Awapuni 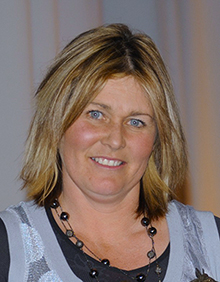 One of New Zealand’s finest trainers, the 2012/13 season looks likely to be a big one for Lisa Latta. She has finished in the top five on the Premiership table for the last four seasons and will threaten the top three in 2012/13.

Lisa has a well deserved reputation for producing big race winners and prepared seven Group and Listed winners in 2011/12, just one behind top trainer Stephen McKee who had eight. Lisa nominates the highlights of her career to date as winning the Group 1 New Zealand Oaks with WHARITE PRINCESS and Group 1 WFA Zabeel Classic with MIKKI STREET.

Horses have been close to Lisa’s heart from a very young age and by the age of five she had learned to ride her first pony. Throughout her childhood and teen years, she was either hunting, competing in one day events or show jumping. At 14 she became the youngest ever person in New Zealand to be ranked in the top 10 for Barrel racing and at 16 Lisa was a New Zealand Champion Barrel Racer.

Lisa loves training horses and her goals are straight forward. She wants to be the first woman to win the New Zealand trainers, Premiership and in her words, “I want to win more Group One races and would particularly like to win the NZ Derby.”