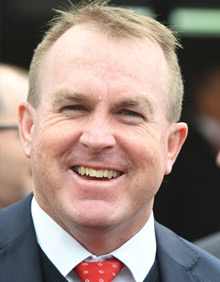 John O’Shea is considered amongst the elite trainers in the Sydney racing ranks with 28 Group 1 wins next to his name. John celebrated his very first Group 1 win in 2002 with Shot Of Thunder in the Toorak Handicap at Caulfield. Since then, John has enjoyed success at the highest level with top class gallopers Charge Forward, Foxwedge and Racing To Win before taking up the Head Training position for Godolphin, Australia in 2014. In that time, he celebrated more than 550 winners including 10 Group 1 victories with the likes of Astern, It’s Somewhat and Exosphere. After three years, John returned to the public training ranks in August 2017, setting up a stable at Randwick surrounded by a great team, loyal owners and quality horses.