“The horse I bet on was so slow, the jockey kept a diary of the trip.” ~ Henny Youngman
You are here:Latest»News

Go Racing had plenty to celebrate on Saturday after posting a trans-Tasman winning double.

First to salute was Diss Is Dramatic who showed all her fighting qualities when she downed a handy line-up of two-year-olds in Saturday’s Listed Berkley Stud Champagne Stakes (1200m) at Riccarton.

Barely 10 minutes later Go Racing landed another feature win on the other side of the Tasman with Stardome in the XXXX Gold Coast Cup (2400m).

The Lisa Latta-trained Diss Is Dramatic had finished runner-up behind race favourite Defiant last start without much luck after being squeezed out of a gap in the home straight when looking a winning chance.

This time rider Tina Comignaghi made sure she was in plenty of clear air approaching the home turn as she brought Diss Is Dramatic into contention out in the middle of the track.

Eventual runner-up Redmond had been joined by Diss Is Dramatic’s stablemate Chevaux, who was giving plenty of cheek, before Comignaghi asked her mount to extend which she did in fine style to draw away for a stylish length victory at the finish.

“It was a very exciting win,” Go Racing’s Matt Allnutt said. “She did put the writing on the wall last start at Riccarton when she was unlucky running second.

“We were confident going into today and thought the 1200m would suit. Tina said, and I have to agree, that she was a bit flat at the 300 but she is just really tough and found another couple of gears and was really strong the last 50m.

“It was a good tough win and a terrific ride from Tina who is a real emerging talent in the New Zealand riding ranks, the horses just seem to run for her.

“It is mission accomplished with Diss Is Dramatic and a great training performance from Lisa who took her to the Karaka Million where she failed to fire and it is bloody hard to bring them back from such a high pressure race and get back to being a stakes winning two-year-old.”

Latta was delighted with the final result and was full of praise for Comignaghi.

“Diss Is Dramatic had been a little unlucky last time as she got squeezed out of a gap when she was starting to make her run,” she said.

“Tina rode her perfectly as she kept her in the clear and when she asked her to extend, she really showed some fight to get away on them near the finish.”

“She is a very laid-back filly who I think will get over a little more ground as a three-year-old so a break now makes a lot of sense.”

Raced by the Go Racing All About Me Syndicate, Diss Is Dramatic was purchased by Go Racing principal Albert Bosma out of the Cambridge Stud draft for $60,000 during the Book 1 sale at Karaka last year.

She is a daughter of Darci Brahma mare Our Drahma Queen and comes from an extended family that includes multiple Group One winner Suavito and hardy New Zealand galloper Sultan Of Swing.

Meanwhile Stardome went into the A$125,000 Gold Coast staying feature in a rich vein of form, having won or placed in all of his previous four starts at Toowoomba, the Gold Coast, Eagle Farm and Doomben.

The step up to 2400 metres on heavy ground on Saturday brought the very best out of the six-year-old son of Savabeel, who surged out of the pack in the straight and edged ahead of fellow New Zealand hope Soprano Supreme to score a determined victory by half a length.

As well as carrying the colours of Go Racing, Stardome had additional New Zealand connections, being ridden by the now-Queensland-based Mark Du Plessis for champion trainer Chris Waller.

“Thanks to Chris and his team – he’s a tough, fit, good, in-form horse,” Du Plessis said. “I wouldn’t say he relished the going, but his fitness has got him home.

“He was just beautiful. He was off the bridle, but I had him there whenever I wanted. Youngblood had me in trouble, I thought, at one stage, and then I thought the second horse had me in trouble, but he just kept putting his head out, which is the main thing.”

Stardome was bred by Soliloquy Lodge’s Richard Moore, and he was purchased by Go Racing for $135,000 from Haunui Farm’s draft at the 2017 Premier Yearling Sale at Karaka. From 47 starts, he has now recorded eight wins and 14 placings and earned A$482,300 in stakes.

“He’s an old pro,” Waller’s stable representative Brett Killian said. “It was a good, tough effort – a mile and a half on a real bog track. He really was in for the fight today. It’s probably been his most productive preparation. He’s just getting in the with lighter weights in these races, and he’s really appreciating it.” – NZ Racing Desk, Go Racing 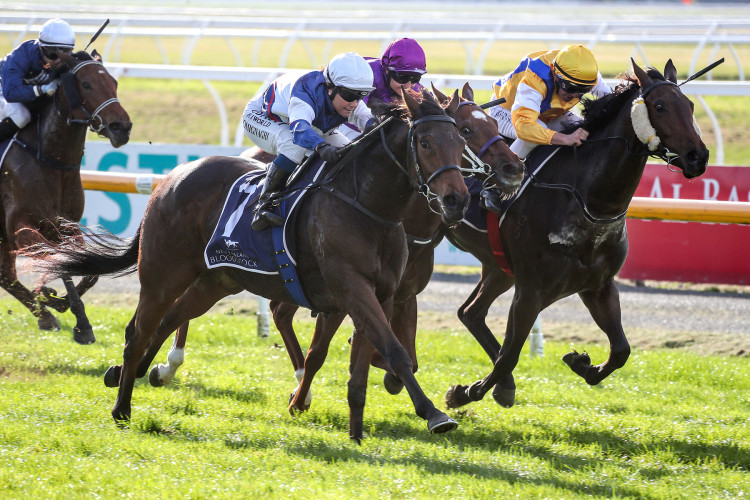 The consistent six-year-old son of Savabeel has come accustomed to lumping hefty weights in handicaps but will relish getting back to weight-for-age conditions.

While yet to win over 2000m, Hasabro warmed up for Saturday’s feature with a game fourth placing in the Listed Easter Cup (1600m) at Riccarton earlier this month under regular rider Jacob Lowry, who will again be in the saddle on Saturday.

“Back to weight-for-age is definitely going to help. He hadn’t had a run for six weeks so I couldn’t have been any happier with his last run where he was carrying 61kgs. He has come through it well and has tightened up nicely,” Carston said.

“We are pretty confident he will get the trip and he won over 1800m at New Plymouth when under Stephen’s care.

“This is the race he has been targeted at back to weight for age and at this stage it will be his last run for the campaign.”

The late addition of 102-rated rival Prise De Fer adds further intrigue to the race, with the Mark Walker-trained galloper likely to head south in preference to carrying topweight in the Gr.3 Manco Easter Handicap (1600m) at Pukekohe on Saturday.

“He is the horse to beat for sure,” Carston admitted.

Meanwhile, Carston is looking forward to the raceday return of stakes winning three-year-old filly Art de Triomphe, with the daughter of Vadamos impressive when scoring an easy trial win over 1000m at Ashburton last week as she returns from injury, with a bone chip cutting short her spring.

“She has come through the trial really well first and foremost. At this stage we are still planning to take her to Te Rapa for the Cambridge Breeders’ Stakes (Gr.3, 1200m) next week,” he said.

“From there the whole prep is up in the air as it is about the only race in New Zealand that suits her at the moment. Whether she goes to Queensland will depend on how she goes at Te Rapa but she has come back well from her surgery and the trial was all I could ask for. I was more than happy.” – NZ Racing Desk 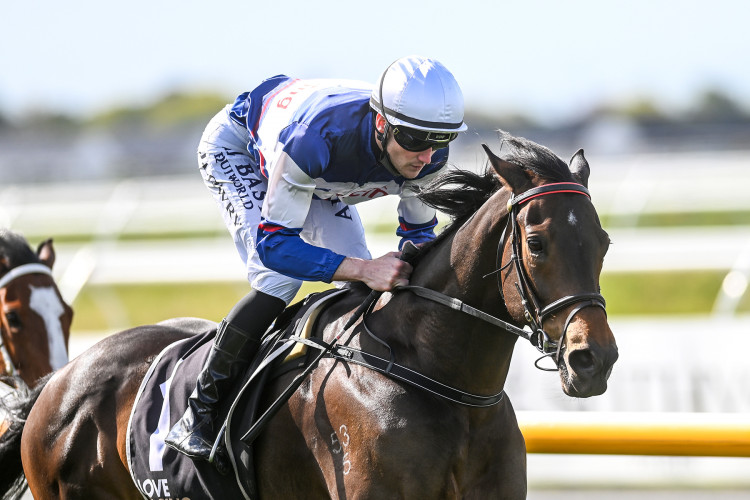