“You were a lord if you had a horse… Far back, far back in our dark soul the horse prances… The horse, the horse! The symbol of surging potency and power of movement, of action, in man.” ~ D. H. Lawrence
You are here:About»Trent Busuttin and Natalie Young – Melbourne 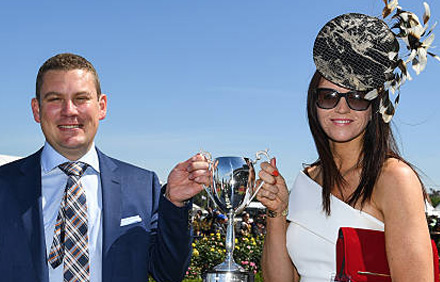 Trent and Natalie are a winning partnership both on and off the track.

Horses run in their blood. Trent’s father Paddy Busuttin was a successful trainer in Foxton with the legendary CASTLETOWN and then in Singapore, and Trent from a young age wanted to follow in his footsteps.

Natalie also comes from an equine background. Her mother was a trainer-owner and her father was a farrier. She met Trent as a track rider in Singapore and they spent the next 10 years there with Trent in partnership with his father.

In 2007 they returned to Cambridge and trained in their own right. They won the Wellington Cup with SIX O’CLOCK NEWS in 2012 but it was a horse named SANGSTER that really kicked off their career winning the Victoria Derby in 2011, and both the Herbie Dyke Stakes and the Auckland Cup in 2013.

In 2016, shortly after TAVAGO claimed the Australian Derby for them, with Natalie the first female trainer to win it, Trent and Natalie established their Melbourne facility at Cranbourne. This season they have trained Group 2 winners ACTING in the Thousand Guineas Prelude and THE HOLY ONE in the Stutt Stakes. Within a short space of time, Trent and Natalie have moved into the Top 5 of the Victorian Metropolitan Premiership and look forward to even further success on the track.