“The gambling known as business looks with austere disfavor upon the business known as gambling.” ~ Ambrose Bierce
You are here:About»Andrew Carston – Riccarton Park 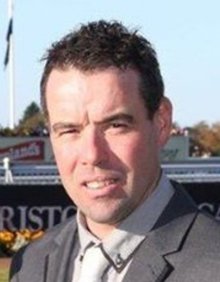 Experienced horseman Andrew Carston established a 20-horse barn at Riccarton Park in Christchurch in August 2015. Andrew, who was Lisa Latta’s foreman at Riccarton, is assisted by his twin sister, former jockey, Michelle Carston.

Andrew’s comes from a South Island racing family and boasts an impressive resume.

Prior to moving back to New Zealand in late 2014, he spent four years with John Sargent, two of which were at Riccarton and two in Sydney. During that time John won the New Zealand premiership and had the most winners in the 2011/12 season (111). Before that he worked for seven years with Mark Walker at Te Akau where he travelled extensively with champion gallopers Darci Brahma (5 Group Ones) and Princess Coup (4 Group Ones). Mark won four premierships during that time.

Andrew was quick to notch up his first win training on his own account with his very first starter for Go Racing when Pinzano (Pins x Martini) was victorious on 24 July 2015 at Ashburton.

“I am excited to be training on my own accord and to be part of the Go Racing family. I am looking forward to adding to the successful team that is in place and I believe that we can make a real mark on both South Island and New Zealand racing.” says Andrew.