“There are, they say, fools, bloody fools and men who remount in a steeplechase.” ~ John Oaksey
You are here:About»Chris Waller – Sydney 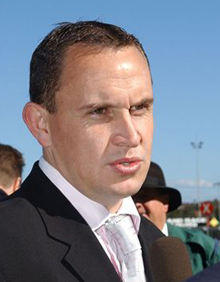 Since moving to Sydney from New Zealand in 2000, Chris Waller has established himself as the leading Sydney trainer, winning the Premiership in the 2010/11 season with 117 Metropolitan wins. It is a fantastic achievement for the boy from Foxton and shows the drive he has had to get to the top.

Chris began his career with horses back in Foxton with trainer Paddy Busuttin. He was travelling Foreman for Busuttin and had an association with stable veteran CASTLETOWN which ran third in the 1992 Melbourne Cup behind Subzero. Chris took over Busuttin’s Foxton stables when the Trainer took up a Singapore training contract, before moving to Sydney after a couple of successful hit and run raids. When Chris first arrived at Rosehill, he had just four horses and hard work and ability have seen him fight his way to the top.

In the autumn of 2008 Chris prepared his first Group 1 winner when TRIPLE HONOUR rocketed to victory in the Doncaster Handicap. Since then Chris has had a further nine Group 1 wins with RANGIRANGDO, DANLEIGH, METAL BENDER, PRESSDAY, MY KINGDOM OF FIFE AND STAND TO GAIN.

Chris remains at the top of the Sydney Premiership and his goal is simple – to add regularly to his list of Group 1 winners.