“Whoever said money can’t buy happiness didn’t know where to buy a race horse.” ~ Anonymous
You are here: Latest » News Archive » Loose Cannon back with a bang

Loose Cannon back with a bang 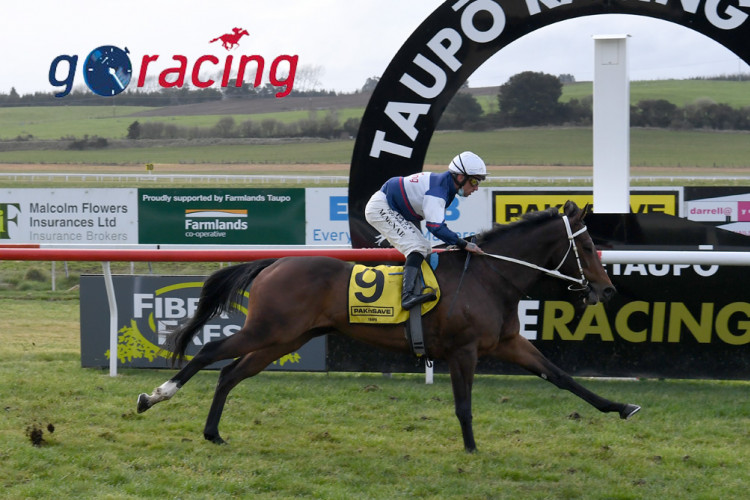 Loose Cannon is well clear of her rivals to win at Taupo on Wednesday. Photo: Race Images South

Go Racing added another win to their season tally on Wednesday with Loose Cannon making an impressive return to racing to score at Taupo.

The daughter of Tavistock hadn’t been sighted on raceday since winning on Boxing Day at Ellerslie last year and she made an immediate impact winning the Hello Youmzain @ Cambridge Stud (1200m) by three lengths.

Ridden by Michael McNab, Loose Cannon travelled wide throughout and launched her attack on pacemaker Challa coming out of the turn. The battle was short lived with Loose Cannon making easy work of her rivals and winning by a comfortable margin from Shoshone, with Challa finishing third.

“It was a very impressive win,” Go Racing’s Albert Bosma said. “She has always been a smart mare with Group race ability.

“She has been a bit injury prone during her career so it was only her tenth start today, though we have never doubted her ability. I thought it was a very strong rating 74 field today with black-type form among the opposition so to win so impressively was very encouraging.”

“It was a wonderful way for her to kick off her campaign and a great training performance from Stephen Marsh and his team.”

Though no set path has been determined, Go Racing will target black type with Loose Cannon who now has three wins and a placing to her credit from just 10 starts.

Later in the day Shibli continued his upward trajectory, placing second at Gosford over a mile.

The European import, purchased at the 2020 Tattersalls Horses in Training Sale, was second up this preparation after finishing third at Randwick last month.

“Shibli is still on the upward swing and improving,” Bosma said. “He took off at the 700, three wide and was beaten by a horse with a soft run.

“He will progress through to be a good Sydney Saturday class horse. He has a lot of promise and looks like he will go further.

“He is still very lightly raced and we hold a good opinion of him. Chris Waller is of the opinion he is a Saturday class horse so we look forward to getting him into the city on a Saturday where he can race for the terrific prizemoney on offer”

The days results were rounded out with two fourth finishes, with Bosma happy with the efforts of both Khaalis and Margaret Jean.

“Khaalis was second-up yesterday after not having raced for 10 months and he is still very much in the improving stage. He will improve again with yesterday’s run under his belt and he is another of our Tattersalls purchases that looks on the verge of breaking through for a win.

“Today he improved and hit the line hard over 1900m. He will develop into a really nice stayer in and has a stack of improvement to come.

“It does take these horses a bit of time to adjust once arriving in Australia and no matter what he does this time in he will improve massively.”

Khaalis’ pedigree indicates stepping out over distance should not pose a problem, he is out of Champion mare Alexander Goldrun whose five Group One wins included the Hong Kong Cup (2000m) at Sha Tin.

Meanwhile Margaret Jean put in a solid resuming run to finish fourth over 1400m at Taupo. The four-year-old mare was having just her fourth raceday start and despite having all bar two of the field in front of her coming into the straight, she finished strongly to make up good ground.

“Margaret Jean is a horse we really like,” Bosma said. “We knew it would be too short for her today and they walked but she hit the line hard and is in for a very good prep. We think she will develop into a lovely staying mare.”

Want to race a European stayer in Australia?

We are buying from the Tattersalls Horses-In-Training sale at Newmarket in England from 25 – 28 October.

This is the sale we have had enormous success from and it is a fabulous opportunity to buy European stayers to compete in Australia.

Read on to get involved.