“O, for a horse with wings.” ~ William Shakespeare
You are here: Latest » News Archive » Guineas goal for Waimoku Falls 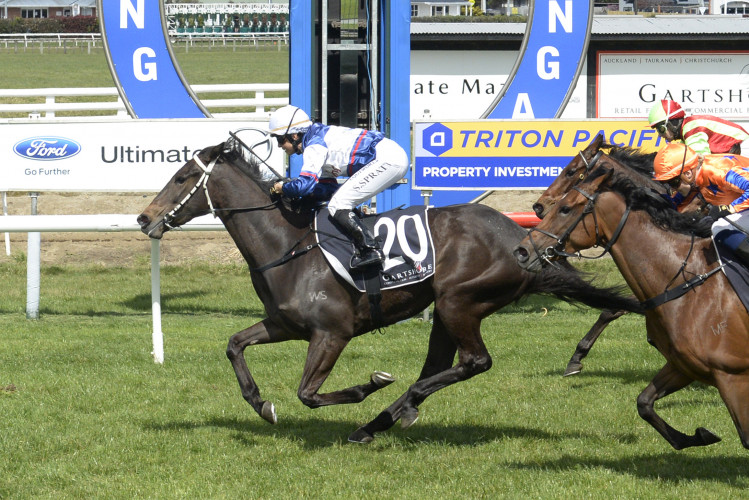 Waimoku Falls wins at her first trip to the races. Photo: Race Images

Well-bred filly Waimoku Falls kicked off her racing career with a smart win on debut at Tauranga on Wednesday over 1300m.

The daughter of Sacred Falls, who races in the silks of syndicators Go Racing, sat in the trail throughout under jockey Sam Spratt and was presented at the right time to win comfortably.

Spratt said the Stephen Mckee-trained Waimoku Falls had a look around when she hit the front, however when she eyeballed the main danger Duby out wide, the filly knuckled down again and Spratt felt there was still plenty to give.

“She got out and as she went further, she did it easily,” Spratt said. “I thought we were going to be in for a bit of a dog fight but the further she went, she lengthened stride.

“She’s got huge improvement in her and she is a lovely filly.”

Purchased out of Waikato Stud’s 2019 New Zealand Bloodstock draft for $140,000, Waimoku Falls is out of Savabeel mare Honolulu, a half-sister to Alamosa and the Group Three placed Sacramento.

The three-year-old filly is likely to target the Gr.3 Soliloquy Stakes (1400m) on October 24 before a possible tilt at the Gr.1 Barneswood Farm New Zealand 1000 Guineas (1600m) at Riccarton in November.

Also at Tauranga, Lord Ardmore impressed when finishing third fresh up over 1200m.

A three-year-old son of Reliable Man, Lord Ardmore debuted in February before being sent for a spell. He has benefited from the break and has returned stronger this campaign.

Future plans are yet to be confirmed for him, though Lord Ardmore is likely to step up in distance as his campaign progresses.

Across the Tasman Sacred Suite finished a credible runner-up on the Gold Coast over 1400m.

Another by the late stallion Sacred Falls, Sacred Suite has been in great form this campaign, placing in each of his three starts.