“Seven days without horses or racing makes one weak.” ~ Anonymous
You are here: Latest » News Archive » Cup full of chances 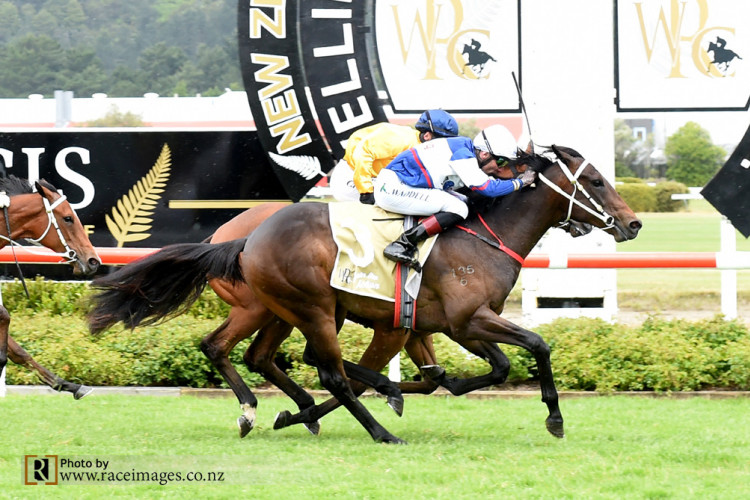 Wellington Cup Day looms large on the racing calendar this Saturday and with it a bevy of Go Racing runners competing around the country.

Weekend racing kicks off in Tauranga on Friday with two Go Racing runners.

Says trainer Stephen Marsh, “It’s great to have Eridani back racing in such good form and from a lovely draw; this race looks to be another good option for her. To help her in amongst other horses, side-winkers will go on for the first time and as per last-start, she will go down to the starting gates early with the Clerk of the course.”

Mighty Aslan will race in the rating 65 1600 metres worth $22,500. Says trainer Stephen McKee, “This race is an ideal option for Mighty Aslan. He went a boomer first up and is a stayer looking for 2000 metres, so this 1600 metres is a natural stepping stone for him. While short of his best, he is coming up well and can be very competitive. The excellent barrier draw of 2 is obviously a big help to his chances.”

McKee says he has taken plenty of natural improvement from that super first up run, has recovered quickly and his work this week has been right up to the mark.

The main billing is at Trentham on Saturday with three Go Racing horses competing.

In the first race on the card the exciting Savabeel colt Exuberant will race in a three-year-old 1200 metres worth $40,000.

Trainer Stephen Marsh says, “It is back to a happy hunting ground for Exuberant who won over 1000 metres at Trentham on debut and he has come up well for this race. His recent work has been good, jockey Jason Waddell knows him well and despite it being a competitive field, we expect him to run well.”

Stephen is rapt with his charge. “He couldn’t have been any more impressive winning over 2200 metres at Ellerslie on New Year’s Day and I couldn’t be happier with how he has come through that race. Obviously he is up in grade for Saturday’s race but he is racing very well and must be a good chance again with luck in the running. He is a stayer we are very excited about.”

Finally at Trentham, Foxwedge gelding Quick Preview runs in the rating 65 1600 metres worth $40,000.

Stephen McKee comments, “He really made up a huge amount of ground in his last race running the second fastest 600 metres in the race. He was very unlucky in his previous start to that and his work at home has been very good with his final hit out on Tuesday morning on the big track.”

“After two average barrier draws, he has got a nice gate in barrier 6 for Saturday’s race. From there we will be looking for jockey Craig Grylls to settle him in the top half of the field and with the big roomy home straight of Trentham we will be looking for him to be really attacking the line as when we know he can.”

Also on Saturday, in the far South, two Andrew Carston-trained prospects line up.

Says Andrew, “This race has a $20,000 Pearl Bonus attached to it which Severine is eligible for and this makes it a lovely target for her.”

Severine has drawn barrier 5 and jockey Kylie Williams taking over from the suspended Sam Wynne.

“Severine has come through her last race in good order and from barrier 5 she should get a nice run throughout Saturday’s race. The track is currently a dead 4 and the forecast indicates that the track will be in the good to dead range on Saturday. Severine has been flying this campaign and her last start miss was down to the slow track. She loves a good track, all her form is on them and she gets one this Saturday.” says Andrew.

Stablemate Sanctify races in the $50,000 Listed Gore Guineas over 1335 metres.

Says Andrew, “She has drawn beautifully in barrier 2 and Corey Campbell will ride. She is a very progressive filly by Reliable Man that we are aiming towards the New Zealand Oaks. While this race is short of her best distance, it is exciting to have Sanctify racing for black-type and she can show cheek and get some  with a good ride. However she will no doubt improve with this run under her belt and as she is stepped-up in distance.”

Finally, across the Tasman, Euro import  Raqeeq is racing at Rosehill in a rating 78 2000 metres worth A$125,000. Although challenged by a bad draw of barrier 14 in a 15 horse field, he only has 55.5 kilos and is ridden by Irish wonderboy Oisin Orr who recently rode Sayl to victory for Go Racing. Says trainer Chris Waller “He has come back well, his work has been good and he is a genuine each way chance in what is a competitive field.”