“There’s only two things that can beat Wix. One is bad luck, and the second is the next champion.” ~ Chris Waller
You are here: Latest » News Archive » Farewell Trevor McKee 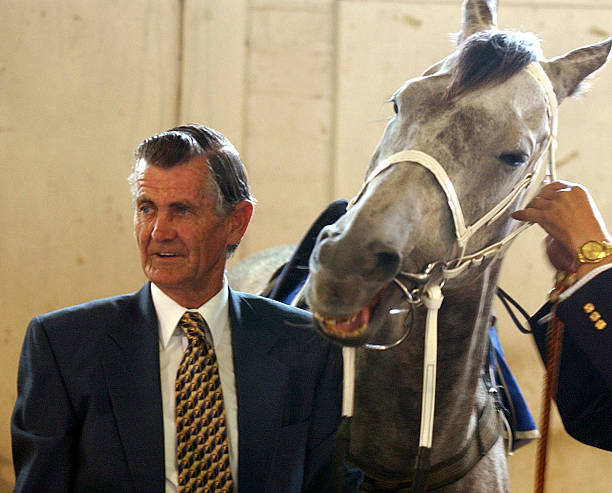 Trevor McKee was a legend, it’s as simple as that. One of our owners was absolutely shaking the first time he met him at the Avondale trials, “He’s the trainer of Sunline!”

But Trevor was a quiet, humble man who even after he retired liked to drive the horse truck for son Stephen McKee’s stable.

Quiet yet determined. You don’t become a trainer of his ilk without it. Says Albert, “The first time I met him I shook his hand. There wasn’t much to him but he had such a strong handshake and he gripped your hand like he was an arm wrestler. It was his trademark.”

Kindness is another trait recalled. “I remember going out to track work. We had a couple of colts, Passing Shot and Prince Mambo both Stakes winners. After they’d worked, Trevor hand pick them grass and offered quiet words of praise to reward them.”

“I think that kindness is why at the horses at the McKee stables are calm and the colts can remain colts.”

Trevor was kind to people too. “He always had time for a word with everyone.”

But mostly he was a terrific horseman. “I remember his wiry frame leaning on the rail at the Karaka Yearling sales unassumingly putting a practised eye over the lots. Against popular opinion, one lot in particular appealed. He said, ‘bugger it, I like it and I’m buying it anyway.’ He backed his own judgement and didn’t necessarily listen the vets. He was old school and he bought a lot of good horses that way.”

The horses and his family were his life. Even when he was retired he was at track work every day and driving the trucks. “I think he got immense pleasure from working with Stephen.”

In addition to Sunline, his legacy includes other top stable performers Solveig, Royal Tiara, Flying Luskin, Moonshine and Super Fiesta. It was fitting that less than two weeks ago Stephen McKee went back to Moonee Valley to win the Sunline Stakes with Consensus.

But to the Go Racing family, Trevor McKee’s legacy is most apparent in his son Stephen. “Sticko has inherited his dad’s hard work ethic, humbleness, kindness and ability. He’s a gentleman like Trevor. We are so very privileged to have him and our thoughts are with Stephen and the wider McKee family.”