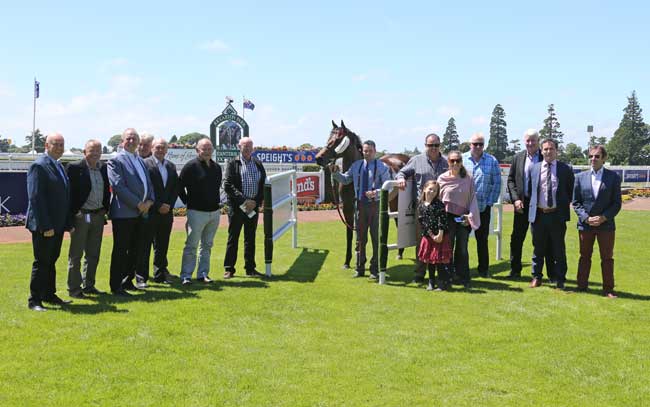 Say Racing Manager Matt Allnutt who was on course for the win, “Full credit to Andrew for having her spot on. It’s not easy for a three-year-old maidener to cope with big fields and the Cup Week crowds but it is a testament to Andrew’s abilities and the way he has with his horses.”

Says Andrew, “She’s a very progressive filly. We knew it was a big ask from the wide draw but she was ridden to perfection by Sam Spratt. She jumped nicely tracked across and got a bit of cover, she was wide the whole way but got some room in the straight to finish it off – right on the line for a photo finish.”

Andrew has his work cut out with the French Cutlet syndicate who races Severine. “Let’s just say they are one of the most demanding. With Go Racing trainers Stephen Marsh, Stephen McKee and Lisa Latta involved there can be a lot of ‘advice’. Matt and Albert are also owners and they think they know a thing or two. What did I do to deserve that lot?”

Severine will now go out on a high for a brief break and will be bought back in to target the South Island summer Guineas races, starting with the Listed $50,000 Gore Guineas on the 19th of January.