“Don’t put the cart before the horse.” ~ Anonymous
You are here: Latest » News Archive » Poised on a Savabeel filly hat trick 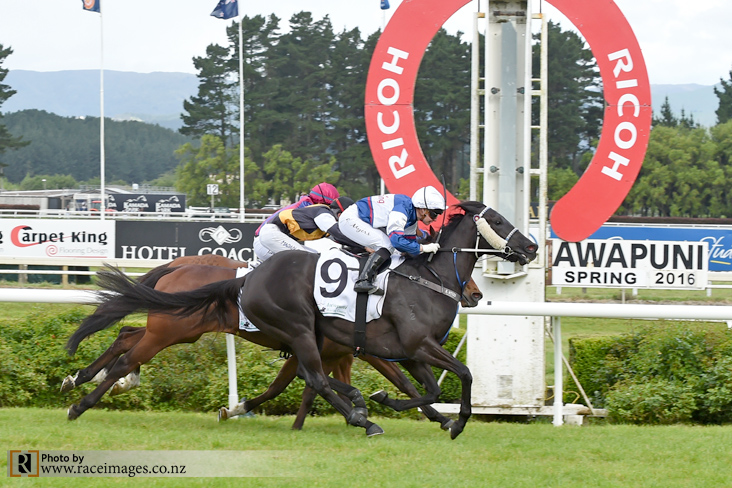 Go Racing is poised on a Savabeel filly hat trick. And, all things going well, it will be one a piece for trainers Lisa Latta, Stephen Marsh and Stephen McKee.

Four-year-old Black Sav (out of Showileo) won the 1200 metres Fielding Hotel Handicap on 29 October worth $20,000 in sensational style. From a wide barrier draw, and reminiscent of her racing style of old, she wasn’t quick away and stayed at the back of the field but turned on a withering burst of speed up the straight to win. Trainer Lisa Latta said, “The use of rings and side winkers kept her focused and it was no panic ride from Rosie Myers.”

Black Sav was set to race at Awapuni tomorrow over 1400 metres but was withdrawn given the heavy conditions. Instead she has been nominated in a rating 75 over 1200 metres at Waverley on Sunday. Rosie Myers is unfortunately unavailable to ride so sister Kelly McCulloch will be in the saddle.

Another four-year-old, Scarlet’s Secret, (out of Scarlet Vanhara) had a brilliant win yesterday at Waipa in a rating 65 over 1150 metres where jockey Michael McNab had the ride of the race. He patiently bidded his time at the back of the field before taking a shortcut along the fence to slot just in behind the leaders. Three wide, he found the gap in the straight and shot through to win.

Trainer Stephen Marsh has ambitious plans for the talented filly. “She blew them out of the water yesterday over a distance well short of her best. On the basis of that performance, we will nominate her for the Rising Star Championships. They are ten qualifying races and the final is at Ellerslie on Boxing Day over 1500 metres worth $80,000.”

Next up is promising two-year-old Hasahalo (out of Halloween) trained by Stephen McKee. Says Stephen, “The later maturing Savabeel progeny wouldn’t usually be considered race ready at this stage. However, Hasahalo showed us something special winning her 900 metres trial at Ellerslie last Thursday. She dominated the distance and the field showing us she is up to racing in the 1100 metres listed two-year-old Murdoch Newell Stakes at Counties on the 19th of November.”

Racing Manager Albert Bosma is a big fan of the Savabeel product. “As a stallion he’s just so versatile and Waikato Stud does such a fantastic job. Fingers crossed for three out of three.”