“We have been involved in racing for so long, it is astonishing we were not born with hooves.” ~ Daniel Wildenstein
You are here: Latest » News Archive » The Circus Comes To Town – Tickets Limited 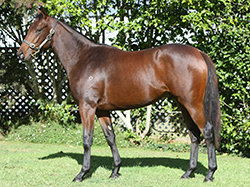 Roll up, roll up!

Get your ring side seats for an outstanding yearling colt by DARCI BRAHMA – one of the most successful sires in the southern hemisphere!

The colt is out of the imported DR FONG mare State Circus, who is a half-sister to the French Stakes winner and successful sire IDAHO QUEST.

Says Racing Manager Albert Bosma, “This cross works. State Circus has only had three foals to the races and two of them were winners, including this boy’s full brother – Brahma Circus – who is only a four year old and already won $250,000 and four races in Singapore.”

Leading trainer Stephen McKee was taken with him, “We immediately nominated him for the Karaka Million Series. He moves effortlessly with a real swagger to him, which you’ve got to love. He is a very switched on colt and I think he will make a two-year-old.”

Call Go Racing clowns Matt or Albert on 0508 GORACING (0508 467224)  or e-mail them at matt@goracing.co.nz or albert@goracing.co.nz to get involved in this athletic colt.