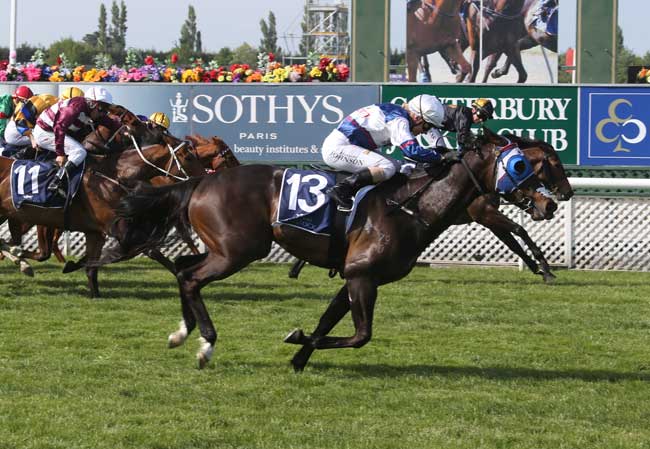 Five year old mare Pinzano has notched up a great fresh up performance over 1200 metres to win at Riccarton on Saturday.

Christchurch Cup weekend was drawing big fields and Pinzano drew the widest barrier of 17 so was up against it from the outset.

What followed was a ride where jockey Danielle Johnson admitted “I probably did everything wrong”, with the mare forced to travel the widest run but she still proved too good and won in a photo finish against Czarista.

It was a great win for Go Racing’s newest Riccarton trainer Andrew Carston who was unsurprised in her turn around in form, “We always knew she would benefit from a bit of time and patience. And we’d like to think she’s enjoying the change of scene training down here now. She’ll back up next week in a rating 75, 1200 metres worth $40,000 which will suit her down to the ground.”

Rosie Myers, who can make the minimum weight of 54 kg, will ride as Danielle is suspended until Sunday following a Melbourne Cup Day ride infringement.

In other Go Racing weekend action, Poetic Affair had a great start in the maiden three-year-old over 1600 metres at Te Rapa but was held up before the turn and pushed backwards. Once she got clear in the straight however she ran home well for a fourth placing.

Trainer Stephen McKee considered her unlucky, “She should have been in the first three. She got into a bit of congestion, once she cleared that she hit the line strongly.”

Poetic Affair is likely to have one more run over a mile before her target on 13 December at Ellerslie, a listed race for three-year-olds over 2100 metres.

Says Stephen, “She’s a nice stayer in the making and she needs the extra distance.”

In Hawke’s Bay, Charlestown ran a very good second fresh up in a rating 75 over 1200 metres. From a very comfortable run, travelling third for most of the race, he stormed to the lead in the straight but came to the end of it just before the post.