“The essential joy of being with horses is that it brings us in contact with the rare elements of grace, beauty, spirit, and fire.” ~ Sharon Ralls Lemon
You are here: Latest » News Archive » Pipped them at the post 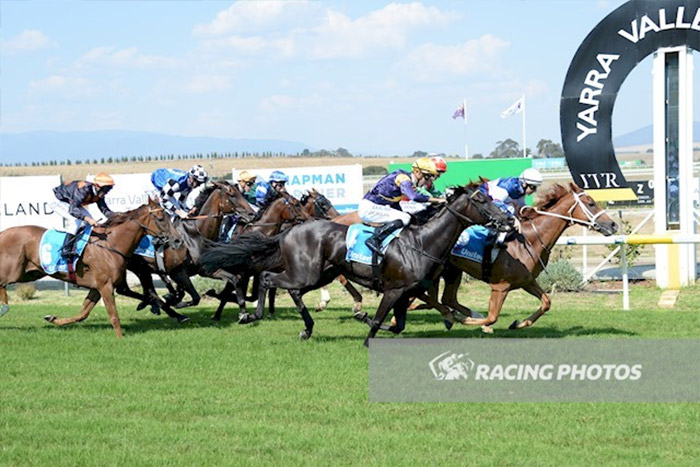 The first of Go Racing’s 2018 Euro-imports to kick off their Australian careers has done so in the best possible way.

Sir Pippin (Intello x Golden Delicious) has won first up at Yarra Valley in a $40,000 Rating 70 event, over a distance that should have been too short for him.

Racing Manager Albert Bosma was delighted. “Our concern going into the race was that the 1500 metres was going to be too short, but his class got him through and he will continue to improve with more racing under his belt, and as he is stepped-up in distance.”

Sir Pippin was bought for £25,000 as a proven stayer with five starts as a three-year-old for two wins and two placings in the UK. Both of his wins were over 2400 metres.

Jockey Damian Lane gave him a positive report after the race commenting that Sir Pippin is in for a good campaign and he was just starting to really climb into his work in the concluding stages of the race.

Says Albert, “He’s a progressive horse who should now work his way through the grades. He will only get better as his distances increase and is an exciting prospect.”

Sir Pippin is next likely to race in a Benchmark 84 1800 metres at Sandown on the 10th April, where he will get in with a light weight.

Hot on the heels of that impressive win, stablemate Obelos hopes to follow suit on Wednesday when he makes his Australian debut. He will start at Hawkesbury in a benchmark 76 1300 metres worth $50,000. He has drawn barrier 1 and Kerrin McEvoy will ride.

Says Albert, “The distance is obviously well short of his best, but the race looks to be a good starting point for Obelos’ racing career in Australia and we are expecting a competitive run from him. The track is a heavy 10 which is a concern but he does have form on rain affected tracks although from barrier 1, it could be tricky. Trainer Chris Waller reports that Obelos is fit and well going into Wednesday’s race and he couldn’t be happier with how he settled in to the stable.”

Obelos is a very well-bred three-year-old gelding by NEW APPROACH out of the Green Desert mare Dahama. New Approach is a son of Champion sire GALILEO and was a 5 x Group 1 winner, including winning the English Derby as a three-year-old.

Says Albert, “All of our European imports have won in Australia and it would be nice if Obelos continues that run on Wednesday.” He is currently rated a $5 chance with the New Zealand TAB.

We are buying stayers for Australia from the world’s largest Horses In Training Sale at Newmarket in England from 26-28 October 2020.

We’ve had enormous success buying from this sale, including our first horse Alward, bought in 2016 who has just topped NZ$800,000 in prize money. If you would like to be involved in the action, click here for more information.